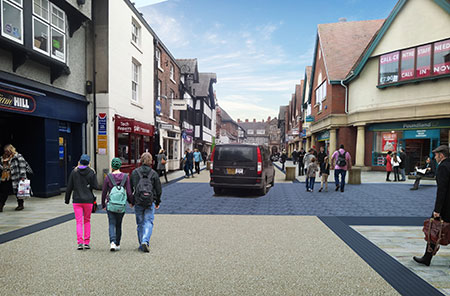 Cheshire West and Chester Council will carry out public realm improvement works on Frodsham Street in Chester, beginning in late June through to December 2016. This is the next phase of work associated with the new Chester Bus Interchange.

The project is funded by the Council and Cheshire & Warrington’s Local Enterprise Partnership who are investing £13.5m from their Local Growth Deal towards both projects.

To carry out these works safely Frodsham Street will be closed, and the way Frodsham Street traffic is routed through the city will be changed. To ease the flow of traffic and maintain services for businesses and residents, it will be necessary to join Foregate Street to Eastgate Street. 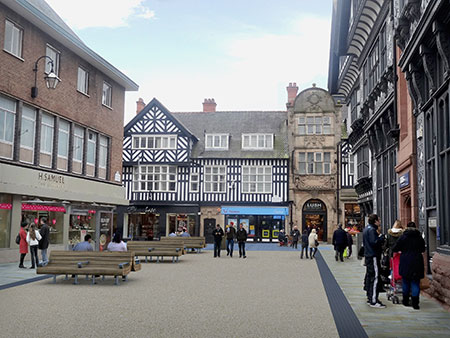 In front of the Royal Bank of Scotland, a temporary road surface will be laid in place of the existing paved area. The existing paving will be removed and an asphalt surface laid to allow vehicle movement from Eastgate to Foregate Street. Pedestrian footways will be maintained either side of the newly created road to allow pedestrians to pass both sides of the construction area in safety.

These advance works are expected to begin on Monday, May 23 and last two weeks. Traffic will only be able to use the temporary connecting road when Frodsham Street is closed in late June.

Councillor Brian Clarke, Cabinet Member for Economic Development and Infrastructure, said: “This next phase of the Chester Bus Interchange project will transform the way Frodsham Street looks and create an attractive gateway into the city. While the works are being undertaken the temporary roadway will maintain deliveries for businesses and keep the city moving. The new bus stops and shelters are being installed to provide good facilities for our bus passengers whilst the Frodsham Street Scheme is built.

“All bus companies, shops and stall holders affected by these advanced works have been informed of the forthcoming works and I’d like to thank them for their patience and support.”

Sunday, January 29th 2:15
Cestrian.com is a hyperlocal for Chester
Tweets by @TheCestrian